Things have been a little slow, posting wise, since Emerald City Comic Con.  You may not have noticed but it has.  Have no fear, there are still things that need to be touched on and tribulations to trial.

One thing that I skipped but should have done well before con was a wear test.  This is especially important for those of you wearing armor type cosplays.  The short and skinny of it is that you’re going to be wearing this outfit for an extended amount of time, in public, on a hot convention floor, where everybody will be bumping into you.  When you are done with your build go ahead and schedule some time to wear it for several hours.  You don’t have to do anything particularly strenuous like running a 5K or jacking up the heat to rival the center of the sun.  Wear it long enough to get a feel for how it is going to feel on the convention floor.  Can you see enough to avoid collisions or do you need a guide/guard?  Is it so hot that you’re at risk of passing out?  If so, can you remove parts to cool down?  Can you drink water to prevent dehydration?  Yeah it may sound kinda far fetched, but trust me, heat stroke can hit you surprisingly fast and can be deadly.  Nobody wants to see Batman pass out in the middle of posing for photographs.  And they certainly don’t want to see him die because he couldn’t get the cowl off and cool down.

Coupled with the heat is the movement.  Make sure that you can move effectively.  If you’re going to be one of those that stands out in one of the common photographing areas without hitting the con floor, this is not as relevant.  For those that do plan on looking around it can be the difference between keeping your armor and throwing it away.  If it is not durable to handle constant bumping and catching then you may want to rethink it.  This has nothing to do with how careful you are, cons tend to be incredibly packed and most goers don’t really care about your cosplay.  Their interest is getting from A to B and if that means bumping, brushing or busting your armor, so be it.  When I was at NYCC ’13 I spoke with Nicole Marie Jean while she was wearing her Namor armor.  She used Worbla to create the armor on the shoulders.  I would never have believed it, apparently it is sturdy enough that all of the people bumping and brushing against the armor was enough to wrench her shoulders enough to be incredibly painful.  Pretty impressive and terrifying at the same time.

Another part of the movement test is the range of motion.  While important for armor cosplays it is much more important for fabric/latex type cosplays.  Why do you ask?  Well, let me tell you.  Most of you, being geeks/nerds, were probably picked on growing up.  So you know what a wedgie feels like.  Now imagine spending the entire day being hot and sweaty with an incredibly wedgie that you can’t really do anything about.  Or, a camel toe bordering on moose paw.  Men, this goes for you too, nobody wants another Tron Guy.  Just to make things more interesting, let’s throw in some wardrobe malfunctions.  If you don’t test those seams in a range of motion/wear test there is always the possibility that you may pop one during the day.  I was so concerned with this on the pants that I cut and sewed together that I covered the interior portion of all the seams with Dritz iron-on mending fabric.  The idea was to stabilize the denim enough that the seams themselves would not be strained too much.  And it worked like a charm!  I am happy to say it survived standing, walking, sitting, squatting, sweating and pretty much everything else you can do legally at a convention.  The draw back, which I learned after the convention, is that it may cause some binding of the fabric after washing.  The seams on the pants held but it looks like the pants shrank a little while the mending fabric remained the same size, causing some stretching and binding at the interfacing.  Which I guess is better than recreating a scene from So Fine; 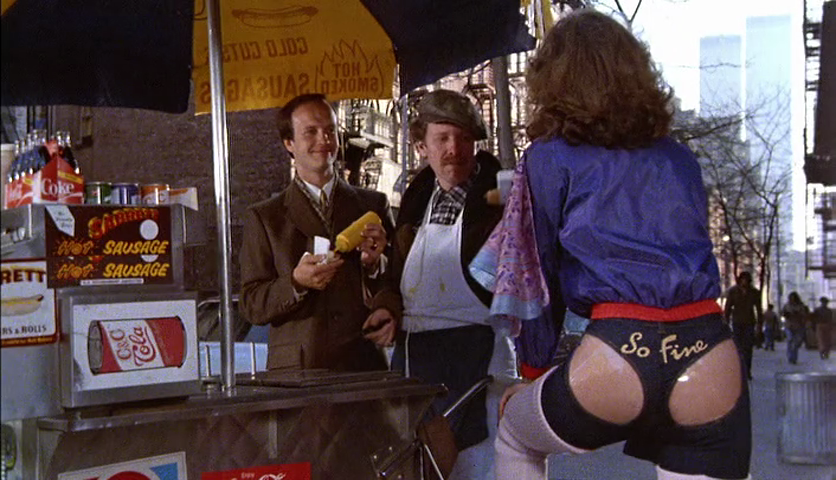 This brings me around to another point, WASH YOUR COSTUME!  Con Funk is a very real thing.  Shower, use deodorant, wash your costume.  If you plan on wearing the same thing the entire weekend and don’t have access to a washer (or it’s not washer ready) Fabreze it.  This is a request on behalf of every fucking person attending the convention.

Some of you are new and some of you don’t exist and I’m basically just talking to myself.  Even so, I know you’re waiting expectantly for the latest update.  Please be patient.  Emerald City Comic Con has come and gone and I am preparing for Awesome Con in a couple of weeks.

Ripping seams.  You’re gonna have to do some.  Get used to the idea.  And no, there’s no trick to make it easier, faster, or less messy.  Sometimes you’re just gonna fuck up and have to resew the seam.  I must have ripped the seams on my zippers 3 or 4 times before I got a working shirt.  I just ripped the seams on my jacket seam so that I can rework the inner sleeve.  Although this last one was pretty easy as they were hand sewn in the first place.  I had made the inner sleeve a little short on the high side and it made getting into the jacket a pain in the ass.  Which, apparently, is an indication that you’ve done something right.  When I tried on the jacket without the shirt the sleeve was functional and looked good for the length but when in costume it didn’t feel right to me.  So with 2 weeks to go I am reworking the sleeves to improve the length and ability to don.